Why Do My Guitar Strings Buzz? And How to Fix It! 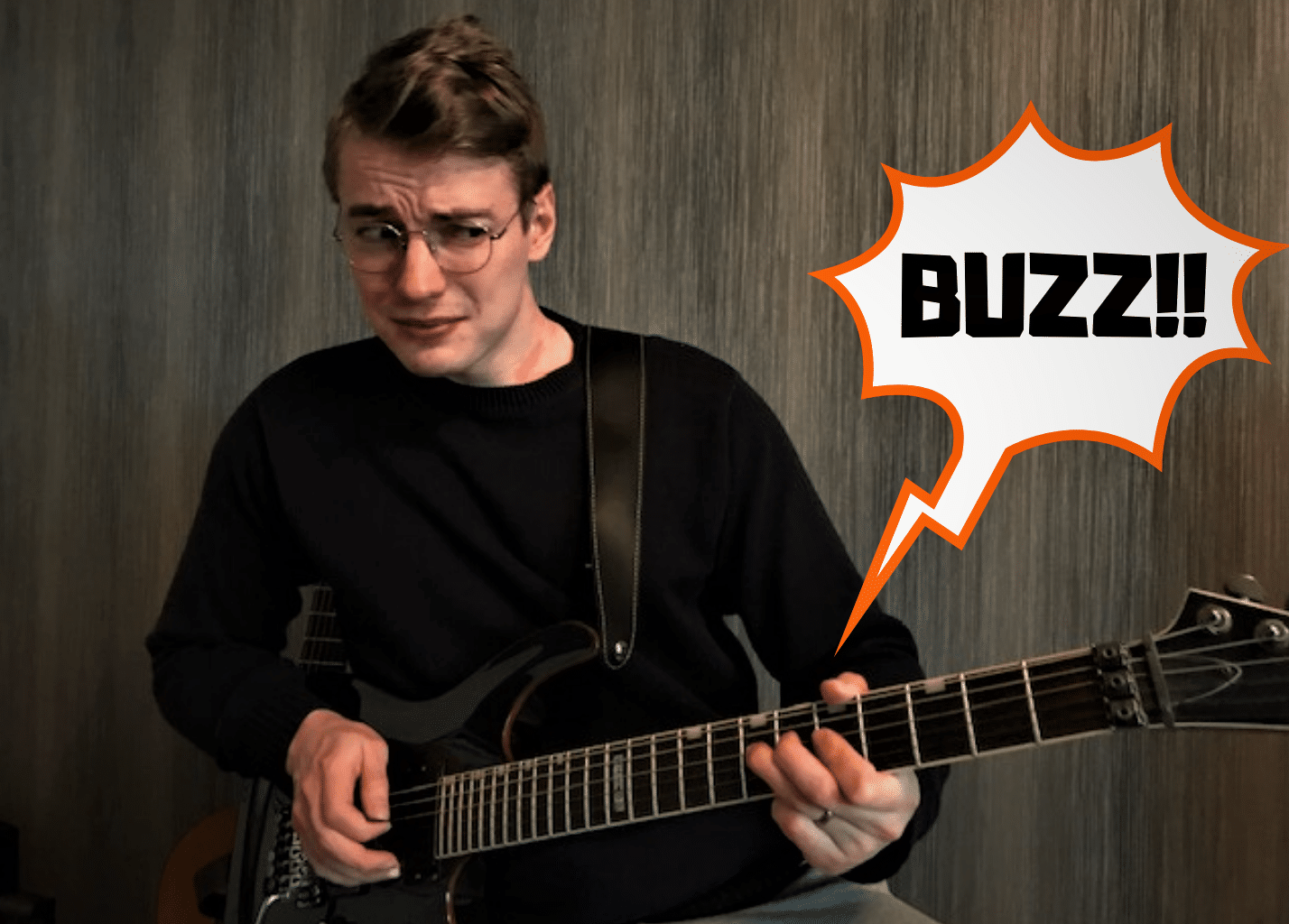 I’m an affiliate. As an Amazon Associate I earn from qualifying purchases(this adds no extra cost for you). Thank you if you use my links, that helps to cover the expenses of this website!

There’s hardly anything worse for guitar players than fret buzz. You take your precious instrument, start playing and notice that disgusting string buzzing sound(not to mention that you get a noticeably shorter sustain). And no matter how well and how hard you press on the strings, you still experience the same issue.

What’s more, your tone can suffer significantly, turning your playing experience into a nightmare. The worst part – your audience will notice it as well(if you have one).

But don’t worry, this is a pretty common problem, even the most experienced guitar players deal with this. It’s not much of a big deal and, in most cases, it’s something that’s easily fixed.

In this brief guide, we’ll first see what causes strings buzz and how it manifests on electric guitars and acoustic guitars. In the end, we’ll explain how you can fix the string buzz. I also included videos from Youtube to help you out.

Why do my guitar strings buzz?

When you press the guitar string on a certain fret, the length of the string is practically reduced, making the sound higher in pitch. But here’s the problem: in some cases, the string can hit other frets, which causes the buzzing sound and reduces the length of your notes (sustain). Here’s what causes this… 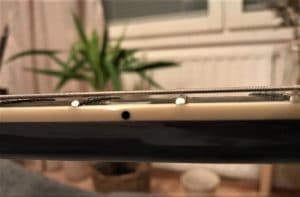 When referring to “string action,” we’re talking about the distance between the string and the frets. There’s no “right” or “wrong” way to approach string action. It usually comes down to a player’s personal preferences. Low action is usually considered to be easier for playing.

But no matter the setup, the string action won’t ever be perfectly even at all frets. It’s usually measured at a few different spots on the neck, and it’s expressed in fractions of a millimeter.

The rule is simple: the lower the string action, the higher the chances that you’ll experience fret buzz. Some more expensive guitars are designed to work buzz-free with extremely low string action. Either way, setting up the right string action is a bit tricky, but far from an impossible task.

All of the frets on the guitar should be at the same level. But in case they’re not, then you have a serious problem on your hands. For instance, you play the fourth string on the fourth fret. If the fifth or the sixth fret is higher than the fourth one, then the string buzz will occur. The moment you play it at normal intensity, you’ll get that awful buzzing sound.

There are two reasons why this may be the case. The first one – your guitar’s frets have worn out. The second reason – your guitar was just not well made. It’s as simple as that.

The guitar nut has worn off 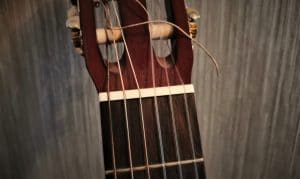 The nut is your guitar’s “zero” fret. It’s placed right where the headstock meets the fretboard. After prolonged use, there’s a chance that your guitar’s nut will wear out significantly. And this is a normal thing for any guitar, so it will happen sooner or later.

This can make the action of the guitar too low and you will experience fret buzz.

Every once in a while, you should set up your neck relief. Since your guitar neck is made of wood, and metal strings create tension and slowly warp it over time. This is nothing unusual, and every electric and most of the acoustic guitars have an adjustable metal bar inside their necks, called the truss rod.

This video gives you ways to check neck relief of your guitar:

Since string action on electric guitars is usually pretty low, the buzzing is a very common problem for them. Especially with lower-quality instruments. When playing without distortion, this can be really noticeable in your tone.

On the other hand, playing with distortion might “mask” this buzz. When playing with some “dirt” on top, you won’t notice it that much. However, you’ll still experience a lack of sustain and an overall poor experience.

It’s important to note that fret buzz on electric guitars should not be confused with electrical hum and buzz. These occur either due to grounding issues, poor shielding, or just the type of pickups(Single-Coils).

Gladly, fixing electric guitar fret buzz is sometimes pretty easy because making adjustments is so simple(more about this later).

Just like with electrics, the buzz on acoustic guitars is due to the same exact reasons – the guitar string hits the other frets. This can be even a bigger issue, since you always play clean on acoustic guitars, and there’s just no way to “mask” it.

The problem here is that setting up acoustic guitars might be a little trickier compared to electric ones. Why? Because some acoustic guitars don’t have a truss rod. So you can’t adjust the neck at all. You can only replace the nut or saddle and sandpaper the frets. Refretting works sometimes too.

How to fix fret buzz?

In order to do some basic adjustments on electric guitar, you’ll need a 0.050-inch hex wrench (aka Allen key), a flathead screwdriver, 1/8-inch hex key, and possibly a string height measurement device. All of these are available in any regular guitar store or a hardware store.

Setting up your guitar bridge

The easiest way to go by is to set up your guitar’s bridge and a truss rod. Most of the electric guitars out there either have the hardtail or tremolo bridge with saddles or the tune-o-matic one. The first one is typical on Fenders and Fender-inspired guitars, while the last mentioned is what you see on Gibsons and Gibson-style guitars.

Fender-style bridges are a little easier to set up. Each individual string saddle has two adjustable screws. You’ll need a 0.050-inch hex wrench, which usually comes with any guitar you purchase these days. Tightening the screws, you raise the action, and by loosening them, you lower the action. After raising it a little, try and play the string on all of the frets. When you reach the desired height with no buzz, leave it there.

Tune-o-matic bridges might be a little trickier, as you’re mostly adjusting the height with just two screws on two ends of the bridge. Minor intonation and height adjusting can be done with a flathead screwdriver by moving the saddles.

In case you’re not confident doing this on your own, it’s a good idea to take your instrument to any guitar tech. Especially if we’re talking about tune-o-matic (Gibson-style) bridges as they might be more difficult to figure out.

Here you can see how to adjust the bridge and the saddles of the Stratocaster:

And here’s how you do the same thing with a Tune-o-matic bridge:

Both acoustic and electric guitars usually have adjustable truss rods that go throughout most of the neck’s length. On electric guitars, the truss rod is accessed at the headstock, and with the acoustic guitars it’s accessed right at the soundhole. For the adjustment, you’ll need a 1/8-inch hex wrench.

First, you’ll need to figure out how whether the neck is “back bowed” or “forward bowed.” The quickest way is to press the fourth string on your guitar’s first and last fret and see whether there are any gaps around the eighth or ninth fret. If there’s anything noticeable, it means that your neck is forward bowed. If that’s the case, then you’ll need to tighten the truss rod screw.

We also have the opposite case, with the “back bow” or “arched” neck. In this case, you’ll have to loosen it up a little.

When it comes to truss rod adjustment, you’ll need to be careful and do only slight adjustments, from 1/8 to 1/4 of a turn. Otherwise, you might risk permanently damaging your guitar’s neck.

I recommend that you watch this video before doing anything:

In case your guitar frets have worn out, there’s no other way – you’ll need to replace them. This is typical for older guitars where friction has completely ruined the frets. For this, we advise that you consult a professional. It’s not an uncommon process, but it requires some advanced knowledge and experience.

Again, the best way to show you how this is done is a video:

If the frets are uneven because of the poor manufacturing, you can use sandpaper or your local music store professionals to try even the frets. This is called fret leveling.

You don’t need many tools to do fret leveling yourself. You need something straight(a straight piece of wood for example), tape, and sandpaper.

Here is a quick video which helps you to figure out what kind of process fret leveling is:

And the same thing goes for your guitar’s nut. In case you think it has worn out, take it to a luthier and have them sort it out. Or you can try to do it yourself. But I recommend that you let professionals handle the nut replacing.

If you are DIY-guy or gal, here’s a video that will help you a lot:

If nothing works, or if it’s too expensive…

In some cases, none of these methods will help you with fret buzz. This is especially the case with cheaper and poor quality guitars. Sometimes they’re just built so bad that you cannot fix them without replacing major parts.

If the repair or replacement costs are too high, you should maybe buy a new instrument.

Yes and no. It’s not a simple question to answer. Whenever you’re changing strings, there’s a chance that your guitar’s setup will change slightly. This is especially the case if your new set of strings are not the same gauge as the ones you used before. Even if your guitar was set up well and had no string buzz issues, a different gauge could mess things up.

This can happen if you’re transitioning from lighter to heavier strings while keeping the same tune. Even though the differences between, let’s say, .010 and .011 gauge strings might not seem drastic, this slight change could cause some string buzzing.

You also need to know that all of the small components on your guitar’s bridge are sensitive to any changes. When you remove the strings and clean your guitar, you might mess things up a little. So even the same gauge and brand of strings can have some buzz. Setting up your guitar once again should solve the issue.

I hope that these tips helped you to solve the issue of the buzzing strings. Buzzing is really annoying but as you saw, it’s not impossible to fix. Sometimes it’s really easy and sometimes it takes a little bit more time and money.

Also, in some rare cases, your own playing can cause fret buzz. Fender made this great post to help you out. 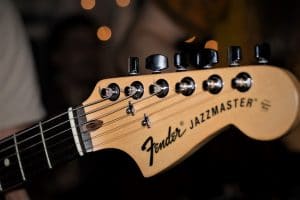 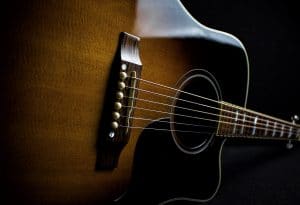 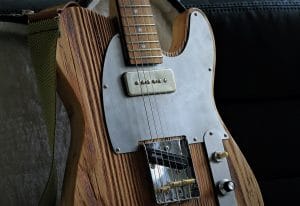 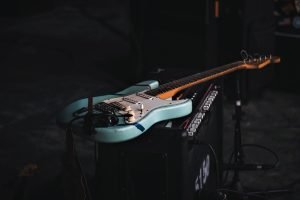