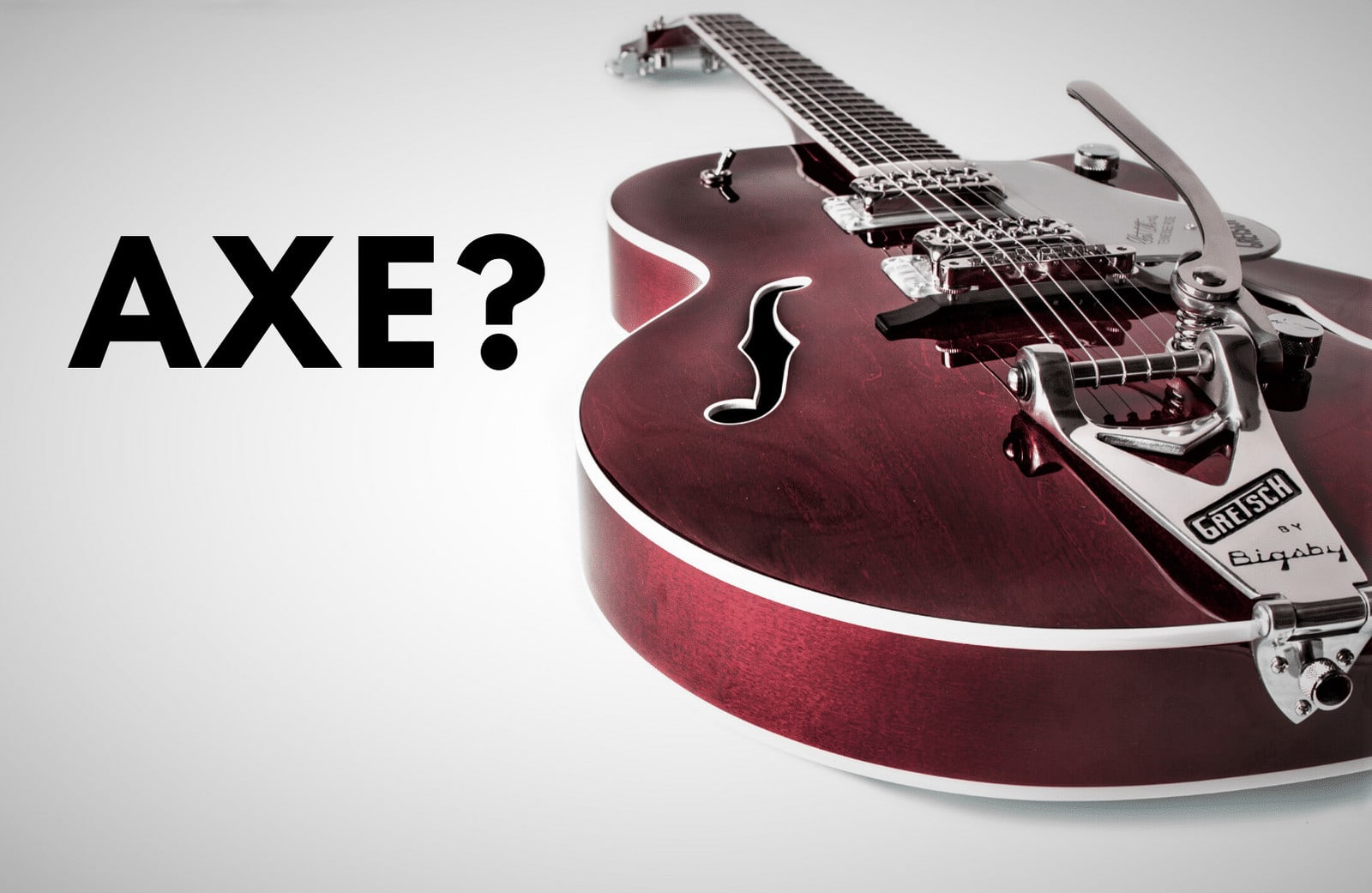 When you step on stage, you’re not only preparing to entertain with your mastery of the musical arts. You’re going into battle; fighting against your fears, your insecurities, and your self-doubts.

You can face these foes fearlessly because you’re equipped with your weapon of choice — the almighty axe.

Of course, I’m talking about your guitar. Electric guitars have been called axes for decades now. But why?

All warriors need rest, so take a break from learning killer riffs for a bit to find out why a guitar is called an axe.

Why Is A Guitar Called An Axe? Like most slang words, we don’t know exactly when and how axe first became a popular nickname for guitars. But there is a high chance that the term was developed by jazz musicians in the 1950’s.  It was the transition of saxophone > sax > axe > all other instruments, including the guitar.

But this is not 100% sure, because there are so many interesting nitty-gritty details in this case. Let’s dive deeper.

Playing guitar since 2004. Primarily an acoustic guitarist who plays and writes traditional American folk music, with a background in melodic metal and a solid foundation as a bassist.

Playing guitar since 2004. Primarily an acoustic guitarist who plays and writes traditional American folk music, with a background in melodic metal and a solid foundation as a bassist.

When did we start calling guitars axes?

Tracing the origins of slang terms can be a real challenge, and the simple answer to this question is that we don’t exactly know when this term originated.

However, there are some rough estimates I can give you, along with a little background on the beginnings of this slang.

Obvious Connections: How Guitars are Similar to Axes

There are first a few things to point out that could have contributed to this slang term for guitars.

These are loose connections, though anything that strengthens the ties between slang and its meaning can help give rise in popularity to the term.

But now, let’s look at some historical evidence.

The use of woodshed as a verb dates back to 1907 and was used as a synonym for punishment, A parent would bring their child to the woodshed for a spanking so as not to disturb the peace of other family members.

If you’re a parent of a beginner musician or are in your own early days of learning an instrument, you know that the first few months of practice can be punishment on the ears of anyone forced to listen.

So it came to be that musicians seeking to practice in peace and quiet would head out to the woodshed to work on their art. Woodshedding, or just shedding, became a popular term among blues and jazz musicians, with one of the earliest recorded instances in a 1936 interview with Louis Armstrong.

Of course, woodsheds were also where firewood was chopped and stored. And what was this done with? An axe. Here we have the first beginnings of connecting musical instruments to axes.

In the foreword to Debra Devi’s book “The Language of the Blues: From Alcorub to Zuzu,” New Orleans musician and music slang expert, Dr. John, explains that a lot of early blues terms were lifted from the illegal lottery business of the 1930s.

“Axe” at this time was used by mobsters to refer to their machine guns. When carried in their bags, these guns looked similar to the electric guitars of the era.

Blues musicians looking to give themselves a bit of edge, started using the slang of the mobsters in their own vernacular.

Jive language had a huge influence on musical terminology, and we owe a lot of our hobby’s slang to the jazz musicians of the 1940s and 50s.

Words like “groovy,” “gig,” “chops,” “wailing,” “killing,” and “noodling” all came from the jive slang popular amongst the early jazz artists of New York, New Orleans, and Chicago.

“Axe” may have originally been used as slang for saxophones. Saxophone, shortened to sax, became axe, which over time became common to any instrument.

Starting in the 1950s, even things like typewriters could be referred to as axes. An axe is a useful tool, so anything that someone used as the main implement in their profession could be called their axe.

By the time the 1960s rolled around, axe had become pretty commonplace slang for guitars.

Hippies of the 1960s would often walk around with guitars slung over their shoulders, strengthening the connection between guitars and the weapons of antiquity.

As rock music gained in popularity, so did the somewhat harsh and violent terminology for guitar performance.

If you’re a great guitarist, you’re a beast or a monster.

If you execute a song perfectly, you murdered it.

If you amaze a crowd, you slayed them.

A great riff is killer, while a bad performance bombed.

Solos can be face-melting, and fast playing shreds the neck.

This can be attributed to the darkness and edginess associated with rock and metal. Musicians in these genres, like the blues artists of the 1930s, often want to be seen as provocative pioneers in an outlier artform.

KISS frontman, Gene Simmons, went so far as to design a custom bass guitar in the shape of an actual axe!

It only makes sense that with the increasing popularity of this attitude that it would become more and more common for guitars to be nicknamed after weapons of violence and tools of destruction.

It’s a bit surprising we haven’t taken it to the next level and started calling electric guitars “WMDs.”

Guitars have a wide range of slang terms around the globe, some more popular (and sensical) than others:

Are there other instruments referred to as axes?

As I mentioned earlier, guitars weren’t even the first instruments to be called axes.

It’s thought that saxophones were the first to bear this title, followed by trumpets and other brass instruments.

In some jazz circles it’s acceptable to call any instrument in the group an axe.

What else is “axe” slang for?

So, Which is it? Is Axe or Ax Correct?

This is one of the many instances in English when there is more than one accepted spelling of a word. Technically, they’re both correct.

They are pronounced exactly the same, and there is no difference in meaning.

Axe is the older spelling of the word, and is the most common outside the U.S.

The spelling “ax” is mostly only popular in the U.S., but has gained traction in other countries over the last 50 years.

However, when referring to guitars, “axe” is almost always the default spelling.

A couple of our favorite axes…

If you want to check a couple of Guitaristnextdoor.com’s favorite axes, check these guides and reviews out (click the text to see the review):

In the end, like most slang words, we don’t know exactly when and how axe first became a popular nickname for guitars.

Maybe it was the transition of saxophone > sax > axe > all other instruments, but I’d bet there was at least one blues guitarist in the 20s who told his wife he was headed to the woodshed with his axe so his playing wouldn’t wake the baby.

Whatever the origin, I’m glad we have this term.

Playing music makes me feel strong and confident, very much like how I imagine I’d feel if I were to walk around with a big medieval weapon. 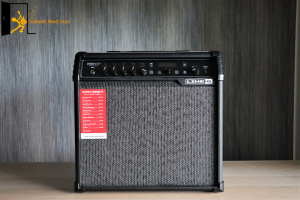 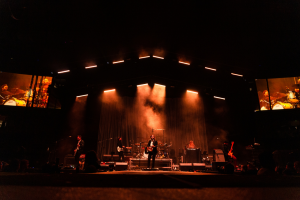 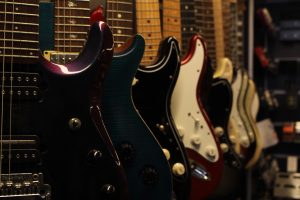